25 Years of “Outstanding and Visionary” Water Restoration and Protection 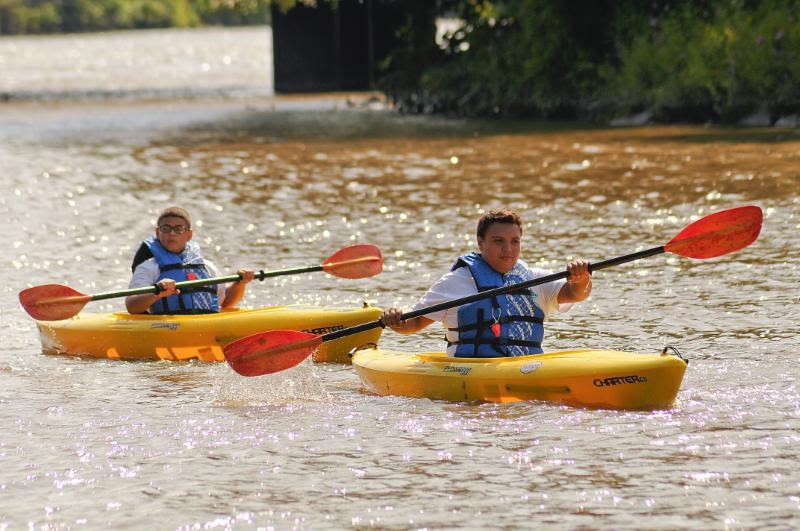 The International River Foundation has announced that Buffalo Niagara Riverkeeper is one of four finalists for the first North American Riverprize, a prestigious global recognition for organizations demonstrating excellence and diversity in river restoration.

“As Buffalo Niagara Riverkeeper celebrates 25 years of progress for our water, we are honored that our innovative work has been recognized by the International River Foundation,” said Jill Jedlicka, executive director. “Our collaborative efforts to improve water quality and public access in the Great Lakes have been successful because of the decades of tremendous citizen engagement. We thank all of our supporters, partners and the Western New York community for this shared honor, and as there is much more work to be done, we reaffirm our commitment to continued progress for our region’s water resources.”

“North America contains the full range of river environments from those with intensive urban developments to the undeveloped, and from the formerly highly polluted to the near pristine. The finalists are diverse but have one common vision – to show that rivers can be restored and that community action is the best way of doing this,” said Dr. Garman. The four finalists will present their achievements at River Rally 2015 in New Mexico, the largest gathering of the river and watershed community in the United States. The North American Riverprize winner will be announced at the Gala Dinner on May 2 in front of an audience of hundreds of NGO leaders, academics, government agency staff, representatives from foundations and corporations, and scientific and policy experts.

The North American Riverprize was open to applicants from the USA, Canada and Mexico who could demonstrate outstanding, visionary and sustainable programs in river management, restoration or protection, regardless of the size of the river of the scale of the project.

Applicants were judged by an independent panel of experts drawn from all three countries and across a range of river management fields. Riverprize winners receive recognition, and reward for their achievements, and are supported to continue their work in to the future.

The winner of the inaugural North American Riverprize will automatically qualify for stage two of the Thiess International Riverprize in 2016, where they will be up against the other regional winners and other outstanding applicants to compete for the world’s top award in river management.

Niagara River (New York)
Founded in 1989 by a volunteer group of environmental professionals and concerned citizens, Buffalo Niagara RIVERKEEPER was created out of the desire to restore and protect the Buffalo River. Through an innovative non-profit business model, Riverkeeper has grown to be one of the largest “Waterkeeper” organizations in the world, now supporting 22 full time staff whose work touches 3,250 miles of waterways throughout the 1,400 square mile Niagara River watershed, including two of the US Great Lakes- Lake Erie and Lake Ontario. Western New York State is the eastern gateway to the Great Lakes Basin, the world’s largest fresh water system, and shares a 40-mile international boundary with Canada along the Niagara River. With 95% of North America’s fresh water flowing through this region, these waterways are priorities for restoration, protection and stewardship. In 1967, the federal government declared the Buffalo River ecologically dead. And in 1987, the International Joint Commission designated the Buffalo River and Niagara River as federal “Areas of Concern,” (AOC). For twenty-five years Buffalo Niagara Riverkeeper, in partnership with public and private entities, has employed best in class fresh water management strategies to restore the region’s water resources, and even put the Buffalo River on a trajectory to be “delisted” as an AOC by 2019. Their work includes creating a living infrastructure network to support life and vitality in the watershed through large-scale sediment remediation, habitat restoration, greenway development and green storm water management as well as collaboration with a variety of sectors and organisations.

Connecticut River (Connecticut, Massachusetts, Vermont, New Hampshire)
As the largest river in New England, the Connecticut River watershed comprises one-sixth of the New England region and is home to 2.3 million residents, as well as hundreds of species of plants and animals. The Silvio O. Conte National Fish and Wildlife Refuge (Refuge) was established in 1997 and is the only multi-state watershed-based refuge in the United States’ vast system of federal refuges. Its aim is to conserve the aquatic and terrestrial habitat resources of the entire 7.2 million-acre Connecticut River watershed across the states of Connecticut, Massachusetts, New Hampshire and Vermont. In 2005, a group of passionate and engaged individuals came together to discuss how best to collaborate to ensure that the vision of the original Refuge founder could be built upon and following that meeting, the Friends of the Silvio O. Conte Refuge (Friends of Conte) was launched. From the beginning, the Friends of Conte have committed to a collaborative effort to further three Central pillars: conservation, outdoor recreation and environmental education. Almost a decade later years later, their membership is comprised of 59 non-profit organisations and 10 state and federal agency partners, working collaboratively towards these shared ideals. Activities have ranged from developing a set of hydrology models to help inform dam operations, collaborating on land protection and water quality initiatives and working to extend the Connecticut River Paddlers’ Trail – The Friends of Conte know firsthand that getting people out on the river is the first step to educating them about the opportunities and the urgency to conserve this essential freshwater resource.

Sun River (Montana)
Inspired by others who were making great progress in river restoration, the Sun River Watershed group was formed in 1994. The group’s primary concerns included water scarcity, water for fisheries, water quality degradation and continued recreational access to the river by all community members After nineteen years of dedication, the Sun River Group have succeeded in forming an ongoing collaborative effort to discuss and solve natural resource issues, provide tools for landholders to assist with management decisions impacting the river, act as a liaison group between management agencies and the public and act as a catalyst for community engagement and conservation.
Most recently, the group has been able to celebrate their most significant success, restoring flows to the chronically dewatered Sun River, while still working to improve the security and efficiency of water allocation for irrigation. The group has worked hard to develop collective action and through 35 miles of riparian restoration, 6,600 acres of upland enhancement projects and one wetland improvement project, they have achieved an 80% reduction in sediment load entering the Sun River. In addition to these on-ground achievements, they now have completed 20 major water conservation projects with partners from multiple sectors including fisheries, irrigation, community, government and conservation.

San Antonio River (Texas)
The San Antonio River is the major river in the San Antonio River Watershed, flowing 240 miles from its headwaters in highly urbanised San Antonio, Texas (7th largest city in the nation) through a largely agrarian area in the southern basin to its confluence with the Guadalupe River where it drains into San Antonio Bay and the Gulf of Mexico. There are at least 73 fish species in the river, and freshwater inflows into the bay support an endangered species (the Whooping Crane). The State of Texas has empowered the San Antonio River Authority (SARA) to preserve, protect and manage the resources and environment of the San Antonio River Watershed. Their mission is to sustain and enrich life in the Watershed. As recently as the 1980s, the San Antonio River was highly polluted by inadequately treated wastewater. Through governmental collaborative efforts, major point source pollution issues have been dealt with resulting in a dramatic improvement in water quality and aquatic and riparian health. More recently, the $384.1 million San Antonio River Improvements Project was completed adding flood management, public amenities, ecosystem restoration and recreational improvements to over 13 miles of the San Antonio River. The project’s ecological features include restoring over eight miles of the river’s natural pool, riffle, run sequences; reconnection of two historic river remnants; restoration of natural backwater habitats; and restoration of over 330 acres of native riparian corridor. SARA’s goal is to have all rivers and creeks within the basin consistently meet the state’s contact recreation standard by 2020.

They Are Demanding Less Waste →